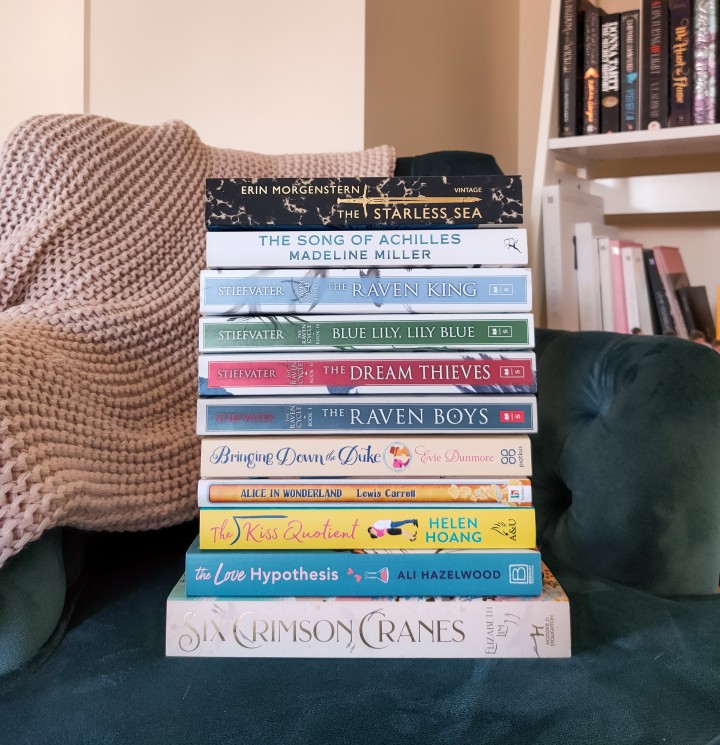 September is by far, my favourite month and the beginning of the best season – Spring. The weather is lovely and perfect for picnics and days spent in the outdoors. This month, I set up a goal to read as much as possible.

Initially, I began with a small TBR of ‘S’ titles, Six Crimson Cranes, the Starless Sea and the Song of Achilles. Once I got through those, I needed to delve into the romances I got for my birthday and then I decided, I just had to reread the Raven Cycle on my uni mid-session break. Planning out the month actually worked this time, who knew?

““Strange, isn’t it? To love a book. When the words on the pages become so precious that they feel like part of your own history because they are. It’s nice to finally have someone read stories I know so intimately.”

~ Bringing Down the Duke 4/5 (An adult historical romance set during the early suffragette movement. A pauper meets a Duke and the story is off!)
~ The Starless Sea 5/5 (A story about stories. Its a magnificent ‘urban’ fantasy. Although the writing style changes between Simon’s perspective and the story within the story, its an interesting writing style and structure that I haven’t seen popularly. Highly recommend to give it a read if you appreciate literature and books as a whole)
~ The Song of Achilles 4/5 (A retelling of the Trojan War through the story of Patroclus and Achilles, a friendship that turns into something more through hardship and trials…literally)
~ Six Crimson Cranes 4/5 (An epic fantasy with East-Asian inspiration throughout the construct of a magnificent world. There’s magic, dragons, assassins and shapeshifters. Major Studio Ghibli vibes!)
~ The Kiss Quotient 3/5 (A modern romance with a disabled main character, autism rep)
~ It Ends With Us 4/5 (Drama, angst, florist AU)
~ The Raven Boys (Book 1 of a great YA Fantasy/Dark Academia for October – psychics, prophecies and hunts for a Welsh King in Virginia)
~ The Love Hypothesis 5/5 (cute, Reylo University Student, *Fake dating AU)
~ The Dream Thieves 4/5 (Book 2)
~ Blue Lily, Lily Blue 5/5 (Book 3)
~Alice in Wonderland 4/5 (The classic!)

My new favourite picks of the month were: The Starless Sea and The Love Hypothesis! I find my favourite books and reads by reading reviews and getting recs from friends helps find the books you’d like and secure those golden reads! I never buy a book on face value (judging a book on its cover lol). If I had to rank my all-time favourite books, there would be adjustments to those rankings

Follow A Wandering Reader on WordPress.com
Join 22 other followers

HAVE A CATCH UP READ